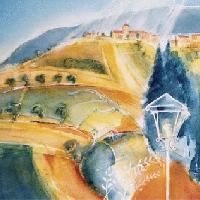 I studied Fine Art and Pottery at Manchester College of Art and Design, graduating in1964.

Writing a thesis and corresponding with Ivon Hitchens for several years, his work was to have an influence on my painting.

On leaving college I became a studio potter in Llangollen and taught part time at the college in Wrexham. Since returning to painting and after illustrating a poetry book my work has been exhibited widely including the Bankside Gallery, London and the Air Gallery, London . Other Galleries include the Black Sheep gallery in 2000 where I won first prize in the Open and also in 2001.also first prize at Oswestry Open in 2004.Other Galleries include the Sadler Street Gallery, Wells,Somerset, and Gorstella Gallery, Chester, Moma Wales Open and Oriel 31,also with the Borderland Visual Art at theatre Clwyd,Mold in 2002 and Affordable Art Fairs in London,Bristol and Newcastle. More recently I have exhibited at Gallery Sca, Shrewsbury, and a major exhibition at Weston Park in the Granary Gallery in September,2012. Also exhibited at the Chester Art Fair in November 2015.this year I exhibited at the Contemporary Art Fair at Mid Cheshire College !Hartford in July and exhibiting at the Chester Art Fair again in November 2016.

My paintings are contemporary landscapes and they try to reflect the beauty of nature that surrounds us .Sketchbook studies are carefully observed and are a vital ingredient from which the the work starts. Back in the studio the creativity begins. My paintings mainly in watercolour are layered washes with sometimes a little pastel which slowly evolve sometimes changing completely from the original observation but this is what I hope makes my work exciting.