Ted Roberts working in paint, sculpture and some printmaking 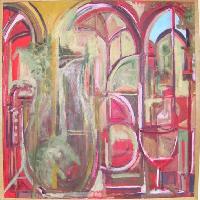 Ted's website
Resume
Amongst many other things, I'm working on a series of paintings based on local rivers and streams, like several of my paintings these are an attempt to represent the mood or ambience of a place rather than a pictorial representation. I'm also making some studies around Oswestry market which may develop into larger scale paintings. Some of my work is based on my childhood, growing up in the Welsh borders; this has included paintings of remembered landscapes and the role played in agriculture by the phases of the moon. I like to think that my work is constantly developing, outside of using oil paint in most of my paintings I make use of a variety of materials in producing 2D and 3D work. In the past I have incorporated found materials in some of my work and became interested in making transient and ephemeral pieces that were gradually subsumed by the environment. My artistic tastes are broad and varied, the influence of some of the artists that I admire might be apparent in some of my work. Leon Kossoff, Terry Setch, Frank Aurbach together with Cezanne, Paula Rego, Matisse, and umpteen Abstract Expressionists.There are also artists whom I admire greatly who might not be immediately apparent but whose work intrigues me, Jenny Holzer, Kathe Kollwitz, David Smith and Judy Chicago to name but a few. I have always aspired to make art which is a true reflection of my intentions, a seemingly obvious but often difficult objective to fulfil. It is the pursuit of that ambition which has driven me to make use of a variety of techniques and materials in achieving that goal.Today I am still as enthusiastic about developing as an artist, and as eager to learn as I was when I bought my first set of oil paints in the mid 1970's. I have an MA in Fine Art and following my initial degree in Fine Art at Cardiff I gained a post graduate diploma in Theatre Design and for twenty years worked as a set designer in television, film and theatre. I qualified as a teacher in 2001 and was a curriculum leader in art and design in two schools in North Wales and Shropshire. When time has allowed I have contributed work to exhibitions locally and further afield. Outside of art I have a keen interest in the natural world, music, literature and film.