Tony Meadows working in Sculpture, Painting and Lifecast based sculpture 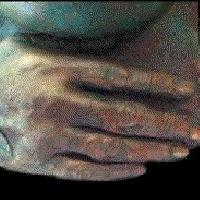 He has one way or another been involved in the arts for over 40 years.

Formerly his work was as a painter (oil and watercolour), etcher, wood engraver and illustrator. He was an Associate Royal Society of Miniature Painters, Sculptors and Gravers, of The Hilliard Society, and member of Artists and Designers in Wales (AADW).

From the 1980s he exhibited widely including The Royal Academy Summer Exhibition, Royal Institute of Painters in Watercolours, Royal Society of Miniature Painters, Sculptors and Gravers, and with several solo exhibitions.

For subject he chooses at present the human figure and is searching for a sense of immanence. However in addition to this, his curmudgeonly nature sometimes surfaces and subjects also include social comment and satire on the stupidities of the fools and politicians who lie to us.